Posted in SHAR: Mod Showcase
Please login to contribute to the conversation.
Cacodaemon24 https://i.imgur.com/rgb6EV1.png DOWNLOAD v1.0 The True Level 7 Restoration Mod restores the cut areas of level 7 and adds minor additional content and tweaks. This was achieved by carefully and pai 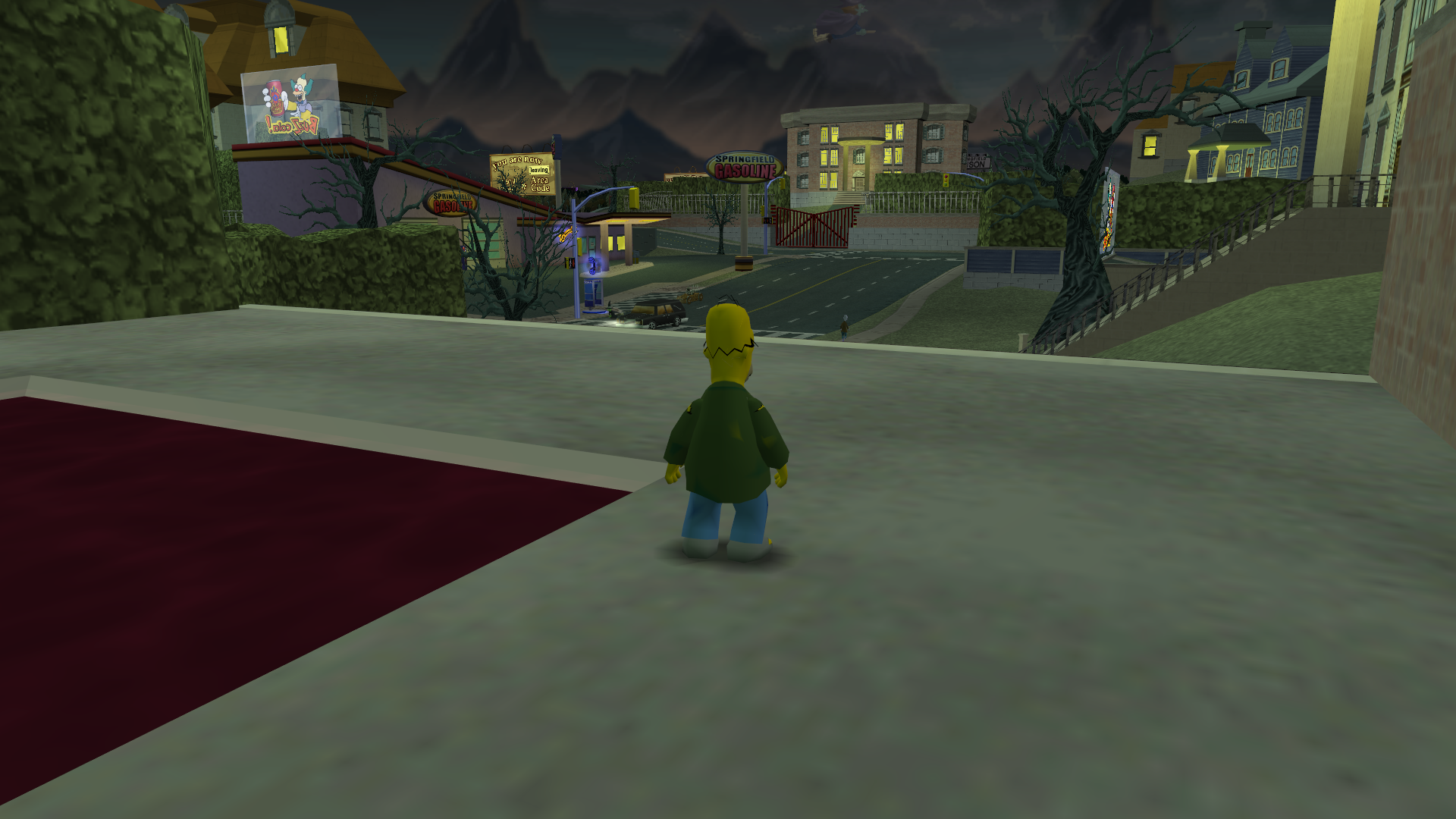 This was achieved by carefully and painstakingly extracting data from level 4 .p3d files and merging them with level 7 .p3d files, a process which created an avalanche of technical issues. After countless hours every texture, model, animation, fence, path, and trigger needed for the cut areas was brought over and rigorously examined to ensure they looked and functioned as intended. Limits for hundreds of nodes were manually increased to fit the new geometry, a custom program was written to adjust the new area's baked lighting to match the rest of the level, and the entrance of the power plant needed modelling changes to fit level 7's nuclear waste barrel room into level 4's hallway. Here's the result: 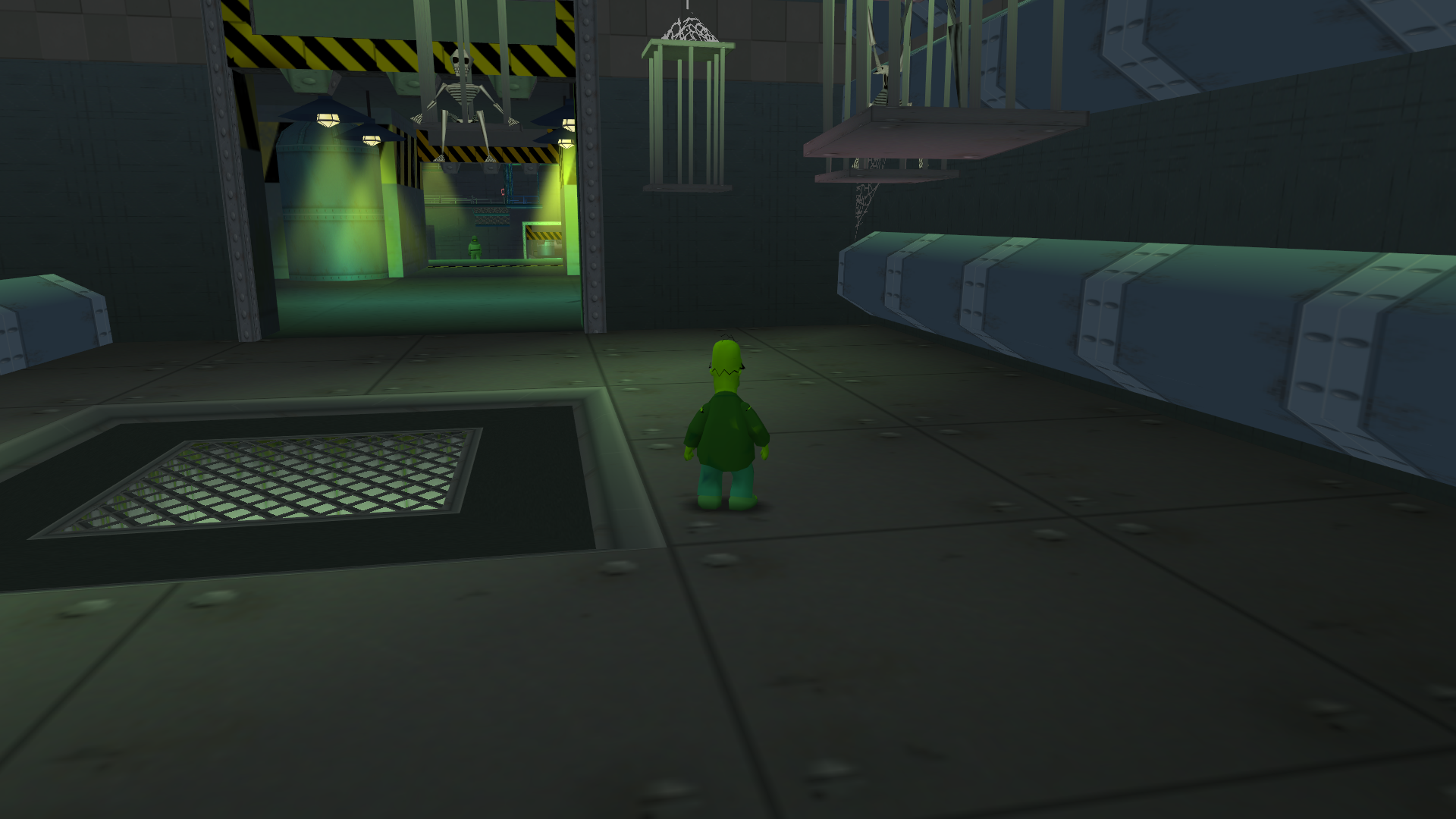 Many other smaller tweaks were also made which are too numerous to list here. After every crash and visual issue was fixed I began working on adding additional content, such as having supplies and barricades appear at the Simpson's house once mission 1 is completed: 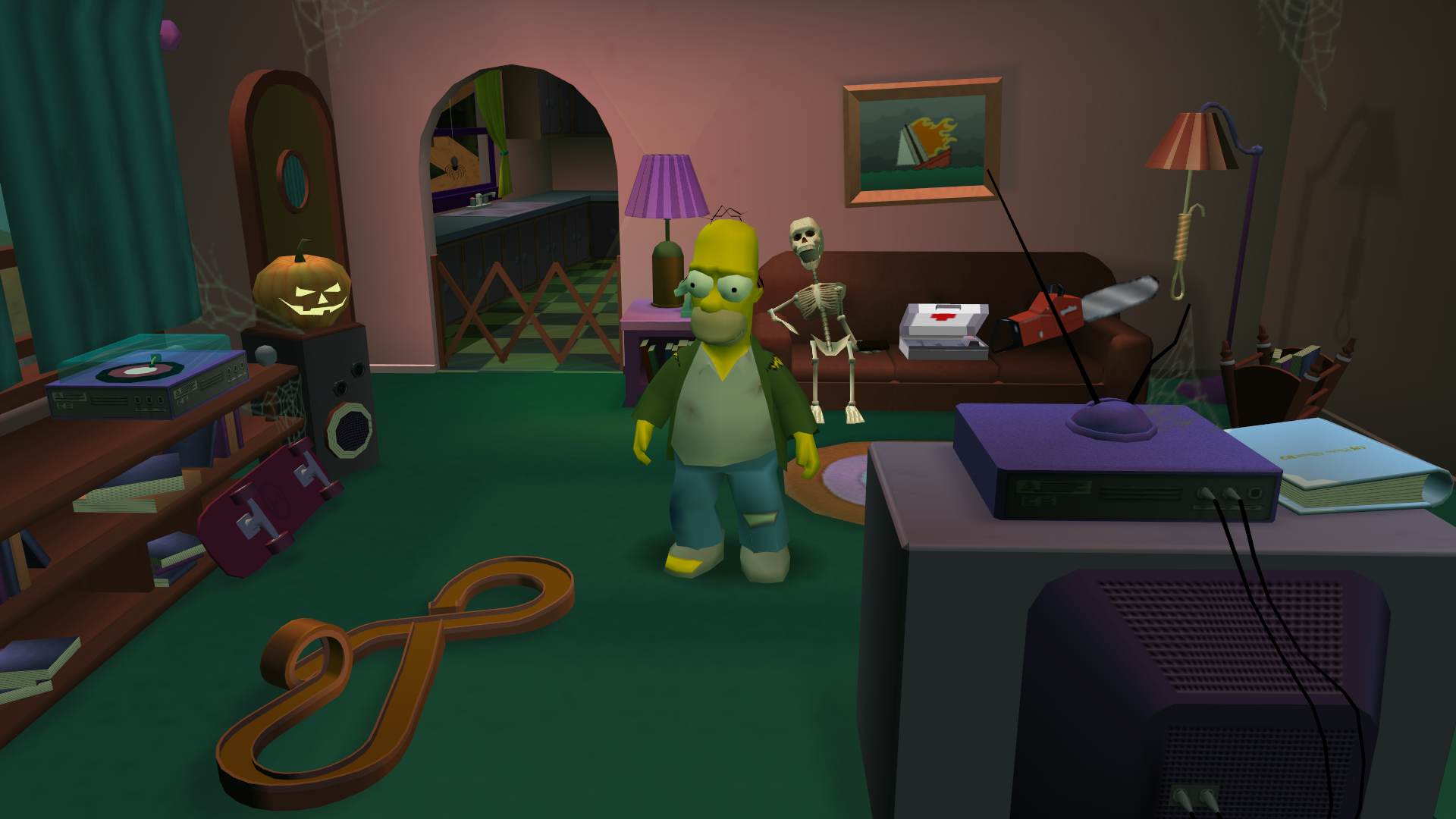 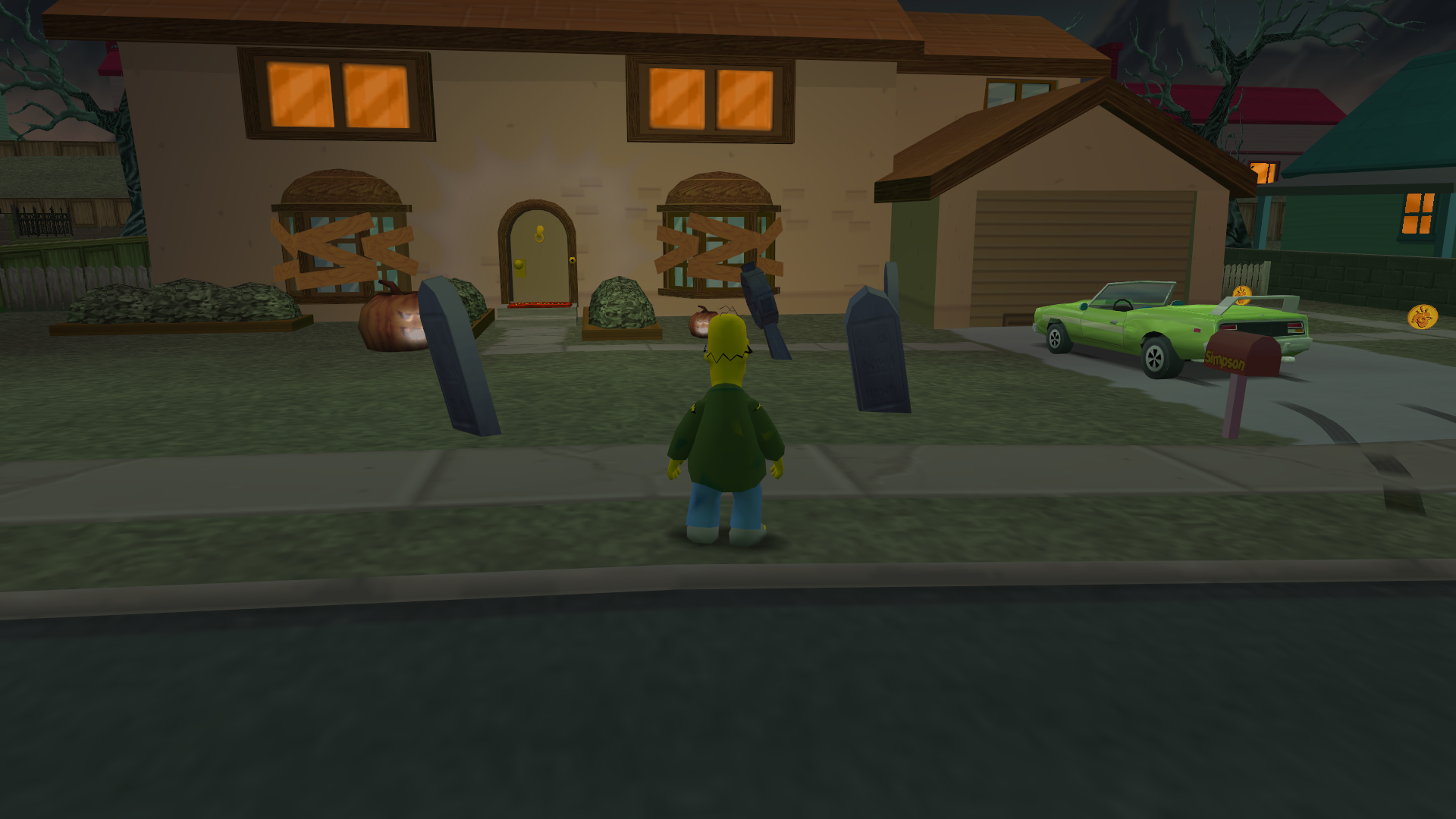 The paintings in the Stonecutters Tunnel were replaced with 'zombified' versions: 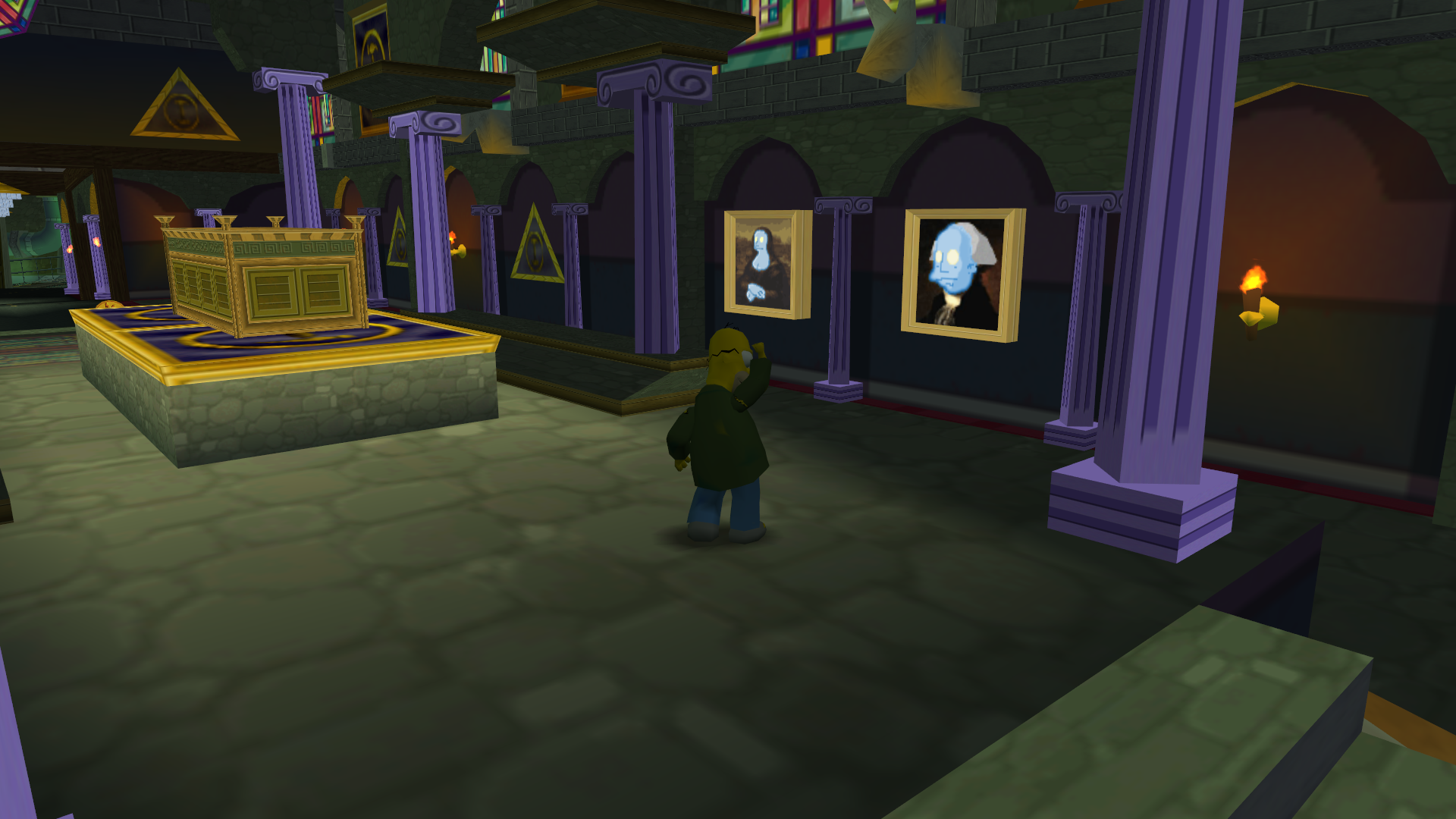 I also upscaled Bart's crop circle texture so it matches with the rest of the level geometry (this has also been applied to level 4): Unfortunately I haven't had time to continue working on the mod as I've had to focus on other projects. I had plans to add more details to the new areas (e.g. pumpkins, gravestones, cobwebs, spiders, ghosts, etc.) and create custom models, textures, and gags to help differentiate it more from level 4, such as zombified power plant workers. I also wanted to alter the collectibles, races, and missions to make greater use of the new areas, particularly the last 3 missions as they get quite repetitive, and we have information on how they were originally intended to be made as well as some unused code:

Instead the blockade near the school and the door at the power plant will close off the new areas during certain races and missions to prevent the player from cheating. The only known issue is that the minimap and road arrows will sometimes point towards the new areas despite being blocked off, though altering the race/mission structure would fix this.

I didn't want my work to go to waste, so I decided to clean up the mod and release it here for the community to enjoy and continue working on. I have set the mod to be able to decompile, so you are free to modify it as you please. I give permission for others to release their own version of this mod, as long as they give credit and link back to here (or at least mention this mod's name).

DOWNLOAD v1.0
1,305 views · 9 likes
Sending vote...
xUnknown Awesome work. I had no idea level 4 had that texture issue in the tomacco field.

xUnknown
Posted 1 year ago · View Statistics
Awesome work. I had no idea level 4 had that texture issue in the tomacco field.
2 likes
Sending vote...
Daniel Hey, I am really glad that someone still cares about this kind of mods. My favourite part of it is obviously the Stonecutters Tunnel because there you get to hear the spooky, scary unused organ music:

Daniel
Posted 1 year ago · Edited 1 year ago
Hey, I am really glad that someone still cares about this kind of mods. My favourite part of it is obviously the Stonecutters Tunnel because there you get to hear the spooky, scary unused organ music:-). I liked the paintings so much, they're perfectly fitting with the theme since they are edited versions of the default ones rather than completely different ones.

P.S. I have played through the mod itself and personally edited some things:

-Danny:-)
3 likes
Sending vote...
AshleyGamer1995 Wow, this is the true Level 7's Rich Side restoration indeed! Excellent work! :D (...I just hope Daniel will carry this over to his latest Beta Restoration mod, too. ^_^)

Alex2005
Posted 1 year ago · View Statistics
I Love it
1 like
Sending vote...
Jay_mate This looks great !

Jay_mate
Posted 1 year ago · View Statistics
This looks great !
1 like
Sending vote...
Cars For Speed This is very cool!

Cars For Speed
Posted 1 year ago · View Statistics
This is very cool!
1 like
Sending vote...
AshleyGamer1995 I think I like the countdown timer added to the second part of There's Something About Monty mission (and to make the mission slightly difficult this way) as well, so that the player can fail this pha

AshleyGamer1995
Posted 1 year ago · Edited 1 year ago
I think I like the countdown timer added to the second part of There's Something About Monty mission (and to make the mission slightly difficult this way) as well, so that the player can fail this phase and hear the unused land_of_choc_end_neg tune play. I know the cue is technically used by restarting the mission after reaching the Power Plant, but actually it feels more right to hear it there, rather than wait at the Elementary School for it to be heard once the time expires.
0 likes
Sending vote...