Oscar Mod Pack Demo Is Here!
oscar_alexboy made this topic 1 month ago
a few "free cars" on same level
mazexz replied to Yori_Ritsuko's topic 5 months ago
Harsher Lighting: Level 3
Imp replied to their own topic 11 months ago

Posted in SHAR: Mod Showcase
Please login to contribute to the conversation.
123
Kenny Giles https://i.imgur.com/7wdMEYi.png Story: After a head-on collision with a local felon that's infamous for his Valley Boy accent, family buffoon Homer Jay Simpson finds himself in a bit of a pickle. He

Story:
After a head-on collision with a local felon that's infamous for his Valley Boy accent, family buffoon Homer Jay Simpson finds himself in a bit of a pickle. He has absolutely no car insurance or moneys to cover the damage, and the man he ran into is growing impatient. Fearing for his life and not to upset Mr. Jailbird (and Marge), Homer begins searching around town for a 'get rich quick' scheme.

As fate would have it, Homer runs into a dork testing a new virtual reality game based off of Springfield, with a sizeable bounty for anybody insane enough to head inside. Said virtual reality program is capable of generating a unique atmosphere per 'Level'. However, it's still very much an early beta, as there's no way to safely leave the game after entering it...Unless it's completed! Fortunately, the poindexter is 50% certain it's completable in it's current state. That's like...nearly half a chance of surviving!

All Homer has to do to clear the game is to find the delicious Golden Donut hidden in every Level. Figuring he has nothing to lose, Homer heads inside the virtual reality game to beta test it, find the donuts, and come out a hero to himself. Can he do it?

About:
This mod is something I started creating in my free-time while looking into a potentially cleaner way to do 'subtitles' for mod dialog. Realizing I wasn't constrained to do a mod plot that relied on sentence mixing or looking for pre-existing dialog, I decided to create a Simpsons mod based on a plot/idea I had on the backburner for ages. The mod as a whole is really just an excuse to design completely custom missions in the vanilla game maps, but I tried to add some pizazz in order to better incentive the player to try it out. As such:

Screenshots (Note: These areas are still a work in progress):
Yokel comin' through!
Close Encounters of the Awkward Kind!
Homer monkeys around near Lard Lads.
Riveting dialog! Exposition! Exclamation points!!!

(Fixes an issue I just now noticed with the Family Sedan phonebooth model being screwed up.)

Cars For Speed
Posted 1 year ago · View Statistics
Very creative and Radical!
0 likes
Sending vote...
Kenny Giles Retexture give me road rage vibez, last screenshot has wrong link btw Went ahead and fixed that a whole day later. Apologies about that! Not sure how I initially overlooked it while previewing the th

Went ahead and fixed that a whole day later. Apologies about that! Not sure how I initially overlooked it while previewing the thread, but I assure you it isn't too much to look at. Probably a poor screenshot choice since the house still needs to be finished up, but pretty much all of Level 1 is in the bag.

The reason it probably gives you Road Rage vibes is due to several of the textures originating from the Road Rage E3 prototype, prior to art style direction shift. I wanted a more cartoony vibe for the first Level and initially started out using textures from Taz: Wanted as a base, but it looked extremely poopy and smelly so it was junked almost immediately. Tappie ended up suggesting a much better reference point that I fell in love with instantly, so I began crafting textures that matched the prototype's style. Really glad to see so many people like how this Level is turning out!

The mod also has some small nice quality of life features I neglected to mention in the original post that were achieved using Additional Script Functionality: 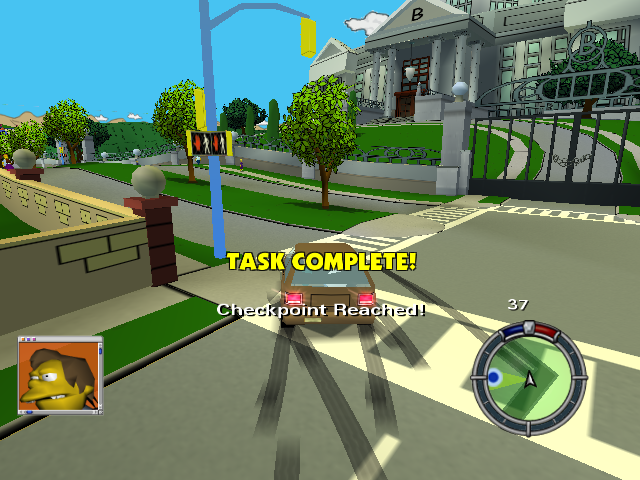 Checkpoints are now a thing in every main story mission and Bonus Mission, complete with some .pag modifications to indicate when you've reached one! Nifty. Don't expect them to pull you out of a jam in a Street Race Challenge though. Those are short enough that you can do without them. You can probably use these checkpoints and some clever resetting to clear missions a wee bit quicker, but who's timing you?...Oh. That's right. The game. 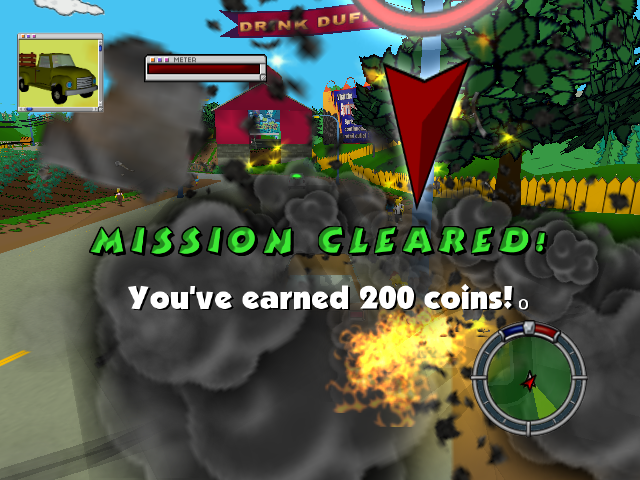 Payouts for every mission! Story Missions now pay out 200 Coins for completing them, with 150 for the Street Races and Bonus Missions. If you find yourself low on funds to buy a new ride later down the line, and exploring the Level doesn't interest you, you can return to missions to grind out some coins. Go ahead and replay the missions you liked with your own self-imposed challenges, such as using the Terrible Truck to complete them. Every mission in Level 1 has been tested to be beatable with it, but best of luck. A truck with the stats of the Monorail will test your driving skills.

Prices will likely start out pretty fair and will only really require that you beat all the Story Missions in that Level to afford everything, but later on you're going to have to do some exploring and try out the other missions in order to get more coins. If that doesn't float your boat though or you get caught up in one too many Hit & Runs, you can always go back to these guys. No more Wager Race grinding. Huzzah!
6 likes
Sending vote...
Glitchedblood Is the mission passed screen inspired by GTA?

JoshuaL2153
Posted 1 year ago · View Statistics
Damn this looks clean!
2 likes
Sending vote...
This post has been removed.
This post has been removed.
Posted 1 year ago · View Statistics
Kenny Giles https://i.imgur.com/KpyLz7r.png Well, that turned out to be a dirty stinking lie. Apologies everyone! A lot of plans popped up and I grossly underestimated the last bit of texture work by a whole fre

Well, that turned out to be a dirty stinking lie. Apologies everyone! A lot of plans popped up and I grossly underestimated the last bit of texture work by a whole freaking lot.

Since I've been teasing this for a little while and I'd hate to keep pushing the release date back (and so I can put this off of my mind for a bit while I go enjoy the rest of my Birthday), I'm doing a Level 1 release as a beta!

A couple of things to note:

Feel free to decompile this and use whatever texture assets applied to the Level that you'd like! Again, the textures originally came from the Road Rage E3 prototype (which can be found online in various forms), with textures for the areas that didn't have any equivalents being done by me. While I really like how this first Level turned out I'm not sure if it's something I'll ever do for all 7 Levels. They'd also probably serve nicely for more original projects as well (like entirely custom maps!).

A Google Drive link has been added to the original forum post. Give it a shot if you're okay with some minor blemishes in the presentation!

Special thanks to Weasel on a Stick for the much better coin collectible name he shot off as a joke in the Discord server. Special thanks to A.J. Nitro for the Road Rage sprites that were used, Deathbringer for the Super Star Ultra Computer Virus boss fight sprites, Bacon for the Sonic Battle cards, and Lemurboy for the ending sprite of Homer in Virtual Bart.
5 likes
Sending vote...
123