Posted in Off Topic
This topic has been locked and can no longer be replied to.
Surreal Bot If you're new to Donut Team, ignore the drama that happened with me and Duffhause. It isn't relevant anymore. As of April 26th 2021, I got a bunch of replies on YouTube from totally not bots advertis

Surreal Bot
Posted 1 year ago · Edited 1 year ago
If you're new to Donut Team, ignore the drama that happened with me and Duffhause. It isn't relevant anymore.

As of April 26th 2021, I got a bunch of replies on YouTube from totally not bots advertising what appears to be a Netflix wannabe (I'm not going to check their site out). I already showed a few of those comments in the Discord, but even more of them came after I shared them. It's ridiculous.

My inbox of Flixzone comments 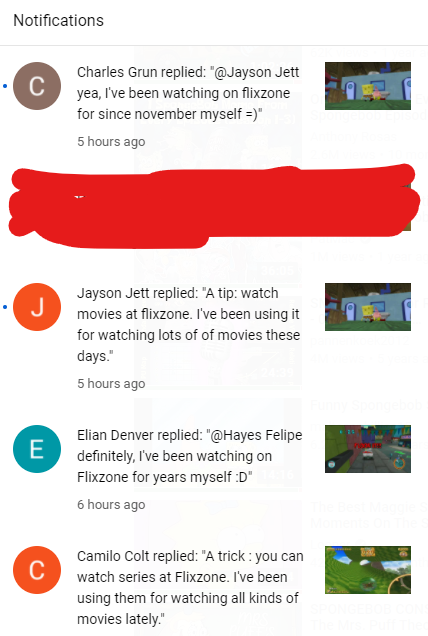 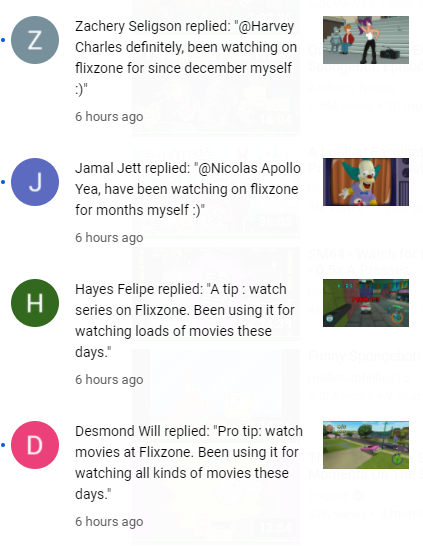 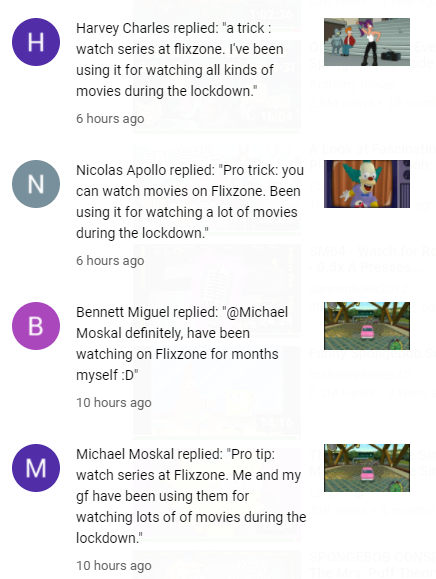 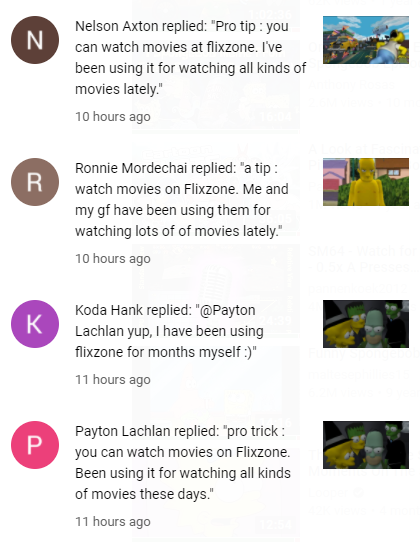 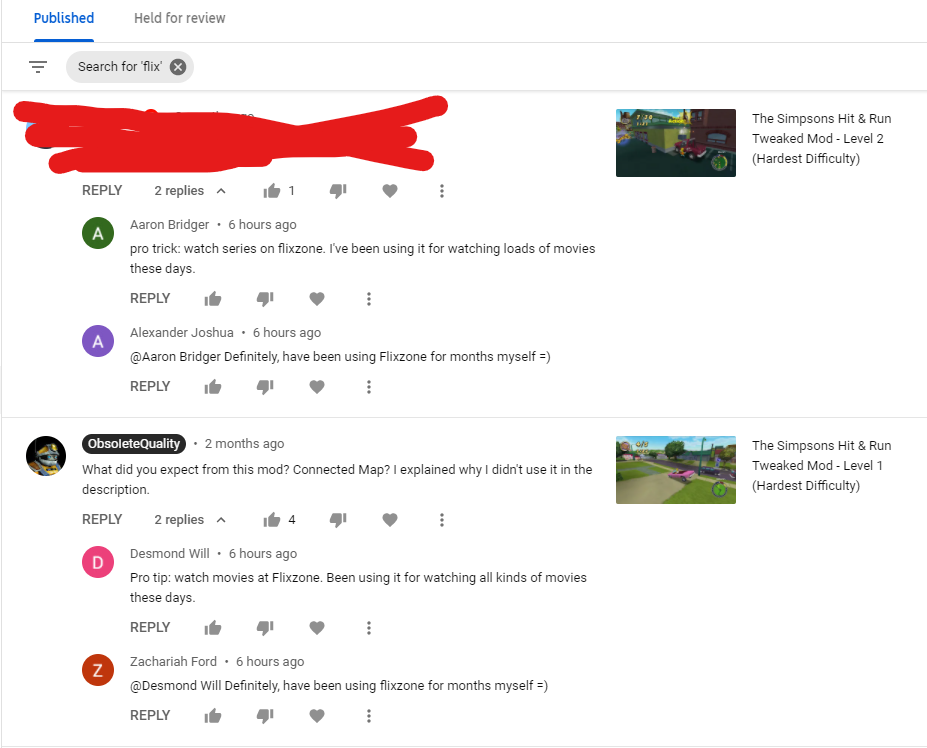 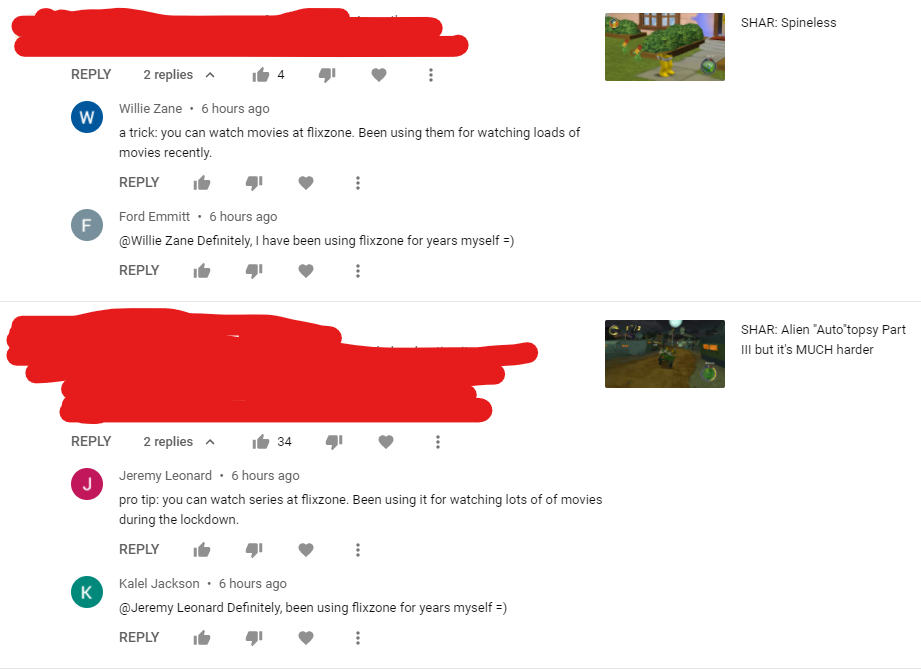 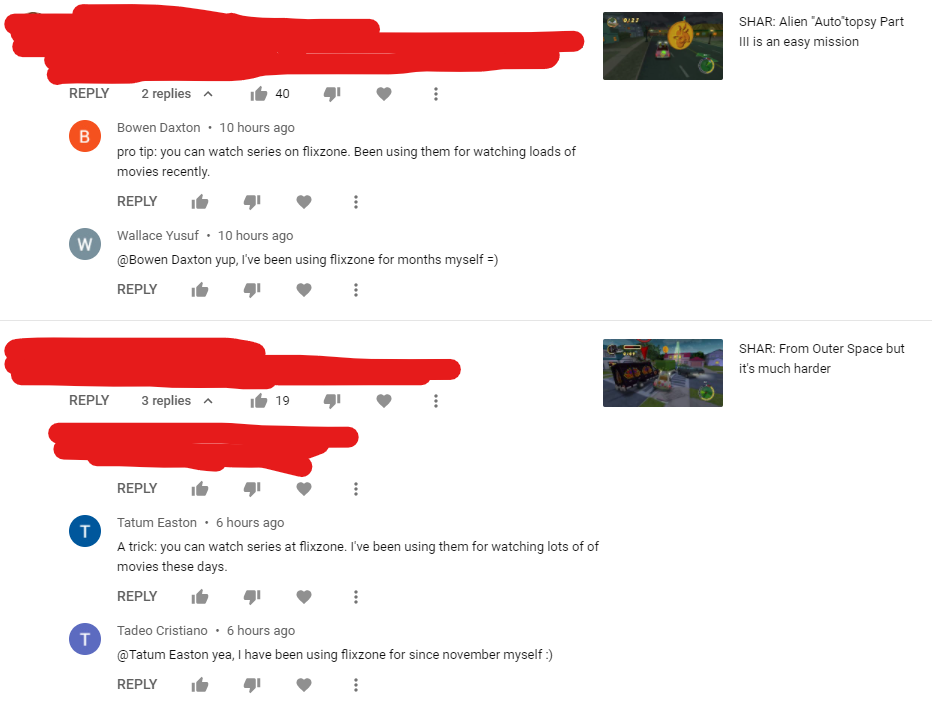 Notice how all but one of those replies happened on the same day. I went "What the f***?" A few of those comments weren't on my videos like the Bewitched Springfield and Super Monkey Ball videos. I first thought I was being targeted, but then I found that I'm not the only one who got this problem. They generally reply to top comments or pinned comments. Obviously, the people confirming that Flauntzone is totally not sketchy are also bots.

Duffhause
Posted 1 year ago · Edited 1 year ago
Haha yeah, I used to get similar spam messages from some bot about supporting Macca

roguecrab.com
Posted 1 year ago · Edited 1 year ago
Open your creator studio and add "flixzone" to your blocked words:

You can also tick "Block links" and comments with links will not be allowed.
3 likes
Sending vote...
Surreal Bot You know what Duffhause? Leave me the fuck alone. I'm sick of you treating me like a Low Tier God supporter who just insulted a troll channel. You and xUnknown are the fucking reason why I don't talk

Surreal Bot
Posted 1 year ago · Edited 1 year ago
You know what Duffhause? Leave me the f*** alone. I'm sick of you treating me like a Low Tier God supporter who just insulted a troll channel. You and xUnknown are the f****** reason why I don't talk much on Donut Team. It's ironic that you say that "you don't have time to waste on 'children like me'" when I was criticizing The Curse of the Flying Hellfish mod but you keep going out of your way to piss me off even when I'm not even talking about you. If you're still salty about one of your friends getting banned because of how you people were relentlessly harassing someone, well your response here pretty much shows it.

For those who need context, I used an alt on YouTube (as of this post, I got rid of it) to respond to someone who appears to be the usual Justin Knight/Ruan De Jager accounts (the name was "Ruan Dee Vaker"). I forgot what I said on the EatMyShorts alt, but whatever the case, Duffhause knew it was my alt. Instead of also calling out the RDJ account like we usually do, he revealed that EatMyShorts was my alt. Basically, if it wasn't for him befriending Macca and then xUnknown, he wouldn't have stooped to this level. Both Macca and xUnknown (mostly the latter) started making subtle hints in the Discord about my alt. 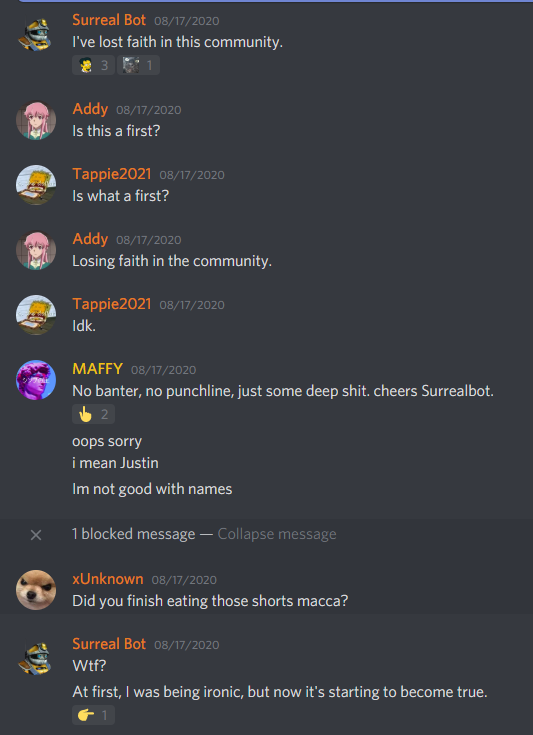 My first message was a joke to an irrelevant conversation (which joke responses like that isn't uncommon). Apparently, Macca was hinting about how I had a J******** account on some other Discord server, but that was completely false. Why would I impersonate a troll whom a lot of us despise? Anyway, xUnknown's message was pretty much what caused me to take a 1-month hiatus from the Discord.

I didn't want to have to make this essay, but seeing as you, Duffhause, are always wanting to start s*** whenever possible for no reason, you were asking for this. You and the rest of Stoner Team are probably going to turn this into another SomeBot copypasta like the immature brats you are. I don't f****** need this.
3 likes
Sending vote...
Surreal Bot @Jake, I knew about the word filter. It's the fact that these comments happened so quickly is what irritated me. I expected them to end after the second wave.

roguecrab.com
Posted 1 year ago · View Statistics
This topic has derailed enough, so I think it is appropriate to lock it and review the posts made here with team.
4 likes
Sending vote...