Posted in SHAR: Mod Showcase
Please login to contribute to the conversation.
Tappie You fled in terror during the Attack of the 50ft Eyesores! You were mildly afraid of The Ghosts of Christmas Presents! But now, brace yourself for the newest horror to infect Hit & Run: https:/

Tappie
Posted 7 months ago · Edited 7 months ago
You fled in terror during the Attack of the 50ft Eyesores!
You were mildly afraid of The Ghosts of Christmas Presents!
But now, brace yourself for the newest horror to infect Hit & Run:

It Came From Springfield is a long lost silent movie from 1929. However, thanks to major perseverance and a bucketload of free time, it has been restored and remastered to the best possible quality it can be. I even colorized it for you.

Note: Due to the majority of the music being copyrighted, I wouldn't recommend playing it on Youtube if you care about being monitized. The main 4 missions are copyright free, however everything else from the Sunday Drive to the Hit & Run music and even the music that plays while walking about isn't.

Known Issues:
-The old-timer overlay is a little bit screwy. It vanishes in menus and whenever there's an irisor fade in/out.
-The "Black and White Beast" is spelt in all caps in the phoebooth, with is a small issue but it's annoying enough to mention. I completely forgot to check it's name until after I finished uploading the mod.
-Restarting "Hungry for More" before the checkpoint will spawn you at the wrong place.
-Uncollected cards in the menu still show the Buzz Cola card background

1,209 views · 10 likes
Sending vote...
kRoLLiK Perfect work!! I found wonderful old soundtracks for myself in this mod and enjoyed vintage silent movie vibe at all!) Also found it funny how music beats are synchronized with Frink's animation of ru

kRoLLiK
Posted 7 months ago · View Statistics
Perfect work!!
I found wonderful old soundtracks for myself in this mod and enjoyed vintage silent movie vibe at all!)
Also found it funny how music beats are synchronized with Frink's animation of running!))
1 like
Sending vote...
Kenny Giles As I mentioned before, I want to extend my apologies for initially thumbing this up but not actually getting the chance to play it until now. Had a really fun time with this one as well! I played thro

Kenny Giles
Posted 6 months ago · View Statistics
As I mentioned before, I want to extend my apologies for initially thumbing this up but not actually getting the chance to play it until now. Had a really fun time with this one as well! I played through all of the new content the mod had to offer. This means All Story Missions with the Hover Car, and then all Monster Cards post-game - I did not bother with the Black & White Beast until post-game, and didn't extensively play around with the missions using any other vehicles. I also didn't bother with any of the Wasp Cameras, as all of them appear to be unchanged from vanilla Level 6? Please correct me if I'm wrong, however: 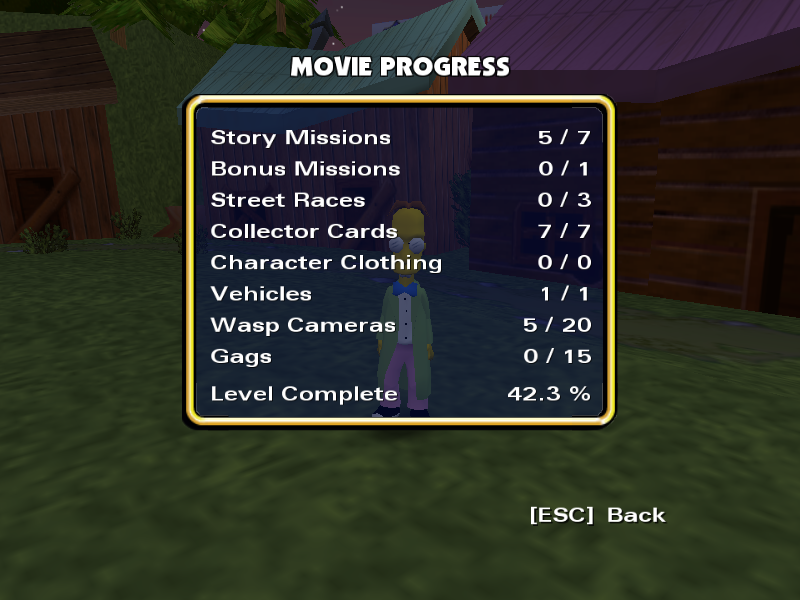 kRoLLiK and several others have touched on this aspect of the mod before me, but I really enjoy the vintage silent film aesthetic to the mod! A fair amount of care went into the sound design as a whole to sell the illusion of it being a silent film. From the goofy little FMVs, the filter over the gameplay, and the music. These three things alone kinda remind me of how Rayman Arena/M had a gag cheat code that aimed to do the same thing:


Spoiler: The only decent footage of the mode in action that I'm aware of?

It very much feels like a 'less is more' deal, in a funny way. Given the small time frame to develop the mod, I think this was a smart and clever decision to have less assets to retroactively modify to an extensive degree. It has the benefit of being unique too since it's something I don't believe has ever been seen in a publicly released mod as well, so it definitely gives it a unique identity. There's some other pretty fun recontextualizing in the mod itself, like the Electrons replacing Coins or Missions being treated as film scenes. I really ended up liking those touches! The ending credits being touched up to match a B-Film credit roll was adorable too.

The plot setup is also really entertaining. I appreciate the concept of using Professor Frink as the mod's primary protagonist since there are a fair amount of possibilities with the 'nutty scientist' persona he offers. The premise of Frink bringing something that isn't alive to life feels as if it takes some cues from the 'Frinkenstein' segment from Treehouse of Horror XIV. However, similarities end there, and the mod creates it's own plot and pre-established lore for the characters. This also isn't exactly an entirely uncommon thing for Treehouse of Horror segments, either! I appreciate the direction this went in knowing you had previously created Attack of the 50 Ft. Eyesores, as I believe the different directions give both mods a neat 'horror' feel that isn't specifically tied to Halloween. There's some decently funny humor in the mod too that showed it wasn't taking itself too seriously. The small fourth wall break with Frink not being able to fix the monster's arms on such short notice got a decent chuckle out of me. After regaining my composure and recovering the laptop I threw across the room, I also had a good laugh out of The Honey Monster's card description.

The mission design was also pretty fun, and I honestly think might be my favorite of the one Level campaign mods you've released thus far? Objective variety is pretty good and never really completely retreads the exact same concept. You've even your got your solemnly seen 'destroy before X reaches Y' objective! They're all divided up pretty evenly. No one mission feels like it goes on for a bit too long for my tastes, or has an out of place objective. There's a nice even split between 'building the monster' and 'attacking the monster' missions, with two missions revolving around both (obviously not counting the filler Mission 0). It results in never feeling like one part of the story overshadows another. I think my favorite mission of the bunch was probably Curse of the Monster or The Monster Returns. The former has a pretty great stage involving saving the injured sea crew. While I initially failed it as I was a bit overwhelmed and overthought on how to use my vehicle to round up the crew quicker, I found the stage provided a fun challenge with a lot of engaging little platforming opportunities the vanilla game's mission design doesn't go into. The Monster Returns has Van Helsing acting as the 'final boss' for the mod (which was a fun change of pace since I was anticipating the creature itself to be the final boss), and the concept of 'luring' the monster with the item bait is actually kinda cute. My only real criticism with the latter is that the organs the monster drops seem to have slightly unforgiving trigger radiuses, so it's a bit easy to accidentally miss them while chasing the monster. There also appears to be a lack of a 'RESET_TO_HERE();', so failing/restarting the mission results in the 'get in to your vehicle' stage briefly awkwardly appearing. The segment is short enough however that it's not a huge deal, but I'm unsure if you'd even have any interest in updating it (especially since I know you have your hands full!).

The 'increasingly destroyed Springfield' was also another highlight. I was actually anticipating that these aesthetics would simply only be active throughout the missions, but continue to persist throughout the entire Level depending on what pre-mission you're on. It actively caught me off-guard to see the broken Ambulances blocking the stairway shortcut and having to plan around that once that effect permanently sets in.

Overall, a really fun time! The silent film approach makes this a joy to play with audio enabled, there's some fun custom aesthetics sprinkled throughout the Level, and the missions are pretty enjoyable without feeling as if they drag on for too long. A lot of it feels like a pretty natural evolution and improvement over your previous work with Eyesores, such as the concept of fighting a 'boss character' or a 'boss' that isn't a traditional 'vehicle' I think most are accustomed to. It's lovely seeing a 'horror' themed hack that isn't specifically entirely Halloween-themed. Good job all around!

Out of curiosity, was the Monster that Frink builds an entirely custom model built from scratch? It almost gives some slight Monsters Inc. vibes to me for some odd reason, but I wasn't entirely sure and I couldn't find anything in the mod that explains the origins of it. If it's entirely custom, it's really cute!
2 likes
Sending vote...
Tappie Hey Kenny, glad to see you enjoyed my mod, it's probably the most fun I've had making one in a while. I also didn't bother with any of the Wasp Cameras, as all of them appear to be unchanged from van

Tappie
Posted 5 months ago · View Statistics
Hey Kenny, glad to see you enjoyed my mod, it's probably the most fun I've had making one in a while.

I also didn't bother with any of the Wasp Cameras, as all of them appear to be unchanged from vanilla Level 6?
They're mostly unchanged, with the exception of 2 or 3 I moved mainly because they got in the way during missions. The only downside was that one I moved to the pier which makes the sailor objective way more annoying if you hadn't destroyed it before.

The filter over the gameplay
Originally it was going to be black and white, but that would've taken way too long to sort out in the short timeframe, so I instead chose to have a dirty overlay to capture that low-quality public domain on Youtube feel, and came up with the whole "digitally restored" gimmick to explain the colour. The filter was originally much worse though.

I honestly think might be my favorite of the one Level campaign mods you've released
For me Ghost of Christmas Presents will always be my faourite, that one just had a higher amount of polish than the others I made. But this one I ended up liking way more than I would, mainly thanks to the music and the general feel of it. I wonder if I'm even gonna be able to continue the "horror" theme I've established for my contest mods since I've ran out of ideas.

The 'increasingly destroyed Springfield' was also another highlight
I needed something to qualify for the "edited/custom" map, and since I despise trying to figure out blender I decided to bring back my favourite feature from Eyesores.

But I'm unsure if you'd even have any interest in updating it
I was planning on releasing an update a while back fixing those smaller issues I listed in the main post. I will hopefully go back to fix it eventually but I've been trying to get back into working on the Looney Tunes mod, since this did burn me out a little. Halloween would probably be the best time to release it.

Out of curiosity, was the Monster that Frink builds an entirely custom model built from scratch?
It was a combination of Homer's body scaled up, and the head of the model from a Halloween costume from Subway Surfers. He was originally going to be a character before I realised that the final mission would've been much easier if he was a car. The arms being removed was because I am very unskilled in blender and wouldn't be able to pose his arms to not be t-posed, so I just got rid of them. The same thing can be seen with the sailors.
0 likes
Sending vote...