Posted in SHAR: Mod Requests
Please login to contribute to the conversation.
Freelancer_T_O_T More of a fantasy idea that I'd like to share. I don't expect anyone to turn this into a mod... But if they want to... I wouldn't object. Quick Description: https://i.imgur.com/SDKlBqs.png Lexy (

Freelancer_T_O_T
Posted 4 days ago · Edited 4 days ago
More of a fantasy idea that I'd like to share. I don't expect anyone to turn this into a mod... But if they want to... I wouldn't object. 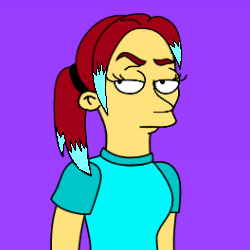 Lexy (aka: Me) moves to Springfield looking for a purpose.
(Imagine Lexy's lines in a posh British voice)

Map:
A custom map, using "Bart's Level 2 Downtown" as a base, but with more roads and shortcuts to make the map feel more open, instead of track based.
Noteworthy buildings/locations added:
Evergreen Terrace (Pale Blue House, Flanders House, Simpsons House, Brown House (retextured Blue House))
Kwik-E-Mart
Used Car Lot
Androids Dungeon
Itchy & Scratchy Store
Powerplant
Springfield Sign (unlike in Level 3, the Springfield Sign will be higher up, and visible from across most of the map)

Welcome To Springfield Tutorial Mission:
Spawn:
Springfield Sign
Initial Objective:
- Look down at Springfield
Conversation Scene:
Lexy: Well, here I am Springfield... You're bigger than I expected... Guess I should get myself a vehicle.
Mission Objectives:
- Go to the DMV
- Talk to Patty & Selma
- Collect your Licence
- Go to the Used Car Lot
- Talk to Gil
- Get in Moe's Sedan
- Go to the Brown House
- Enter the Living Room
Conversation Scene:
Lexy: Well... It's no dream house... But it's the best I could afford... The only house I could afford.

Hi Diddly Ho 1st Mission:
Spawn:
Brown House
Initial Objective:
- Greet your new Neighbours
Conversation Scene:
Ned: Hi diddly ho, neighbourino.
Homer: Stupid Flanders.
Lexy: Uh? Hello. Listen, I'm looking for a job... Have you any recommendations?
Marge: Homie, you're late for work. And today's your workplace evaluation with Mr. Smithers.
Homer: Ah! He'll find my scorpion farm, then where will my scorpions live?
Lexy: Scorpion farm?... Not what I was hoping for, but I guess I'll check it out.
Mission Objectives:
- Get in your vehicle
- Follow Homer
- Destroy Smithers' vehicle
- Resume following Homer to the Powerplant
- Meet Homer at his workstation
Conversation Scene:
Lexy: Wait... This is not a scorpion farm... It's a powerplant.
Homer: Whuh!? That wasn't part of the deal.
Lexy: Are you serious right now?

Would You Like Fries With That? 2nd Mission:
Spawn:
Krusty Burger (Town Square)
Initial Objective:
- Order a burger
Conversation Scene:
Lexy: I'm not risking my health by working at a nuclear plant.
SVT: Welcome to Krusty Burger, may I take your order?
Lexy: I'll have the "Krusty Pacemaker Maker"... Also, do you need a delivery driver? I just got my licence...
SVT: I'll have to ask my manager.
Mission Objectives:
- Get in your vehicle
- Collect the 1st order from the drive-thru
- Deliver the order to the customer before time runs out
- Return to Krusty Burger
- Collect the 2nd order
- Deliver the order before time runs out
- Go to the Krusty Burger near the Police Station
- Collect the 3rd order
- Follow Chief Wiggum until he stops
- Talk to Chief Wiggum
Conversation Scene:
Lexy: Why did you run away? I was just trying to give you your order.
Wiggum: (Laughs) Boy is my face red.
Lexy: Well, I'm not wasting all my earnings on refuelling my car after having to chase down all my customers... What else does this town have to offer?

Worst Job Ever! 3rd Mission:
Spawn:
Androids Dungeon
Initial Objective:
- Talk to Comic Book Guy
Conversation Scene:
Lexy: So, what's my first task then?
CBG: I must get the last copy of the new Itchy & Scratchy Adventures comic. It's the controversial issue, in which they finally kiss.
Lexy: (Sigh) If you say so.
Mission Objectives:
- Race the other nerd to the Itchy & Scratchy Store
- Collect the comic
- Go to Krusty Burger (Police Station)
- Destroy the other Nerd's vehicle
- Get back to The Android's Dungeon
Conversation Scene:
Lexy: That's more unnecessary fuel wasted... Thanks for nothing.

Thank You, Come Again 5th Mission:
Spawn:
Brown House
Initial Objective:
- Purchase Kwik-E-Mart costume from Moe's, DMV, Androids Dungeon, or Kwik-E-Mart
- Check out you new look in the Brown House's window
Conversation Scene:
Lexy: And now, to begin my new permanent job in Springfield.
Mission Objectives:
- Go to the Kwik-E-Mart before time runs out
(You missed the interview, you'll have to impress the manager another way)
- Clean up all the trash around the store's exterior
- Go to Try-N-Save
- Take their Supply Truck
- Lose the cops
- Take the truck back to the Kwik-E-Mart before time runs out
- Destroy the Try-N-Save Employee's vehicle
- Enter the Kwik-E-Mart
- Go to the Manager's Office
- Knock on the door
(Fade out)

Steamed Hams Bonus Mission:
Spawn:
Skinner's House (Pale Blue House)
Initial Objective:
- Talk to Skinner
Conversation Scene:
I think we all know how this goes
Mission Objectives:
- Drive to Krusty Burger before time runs out
- Collect Skinner's order
- Drive back to Skinner's House before time runs out
Conversation Scene:
And we all know how this ends
88 views · 0 likes
Sending vote...
maz Trans monster truck sounds funny, watch this space as I might take my time to make one such truck

maz
Posted 4 days ago · View Statistics
Trans monster truck sounds funny, watch this space as I might take my time to make one such truck
1 like
Sending vote...